Shizuoka General Hospital is a renowned medical facility in the prefecture for providing exceptional services focusing on community health. The hospital aims to improve the health, safety and well being of the community through its outstanding services. The hospital also has a medical research division connected to the hospital.

The customer wanted to build a robust and scalable system to digitize their project. After exploring Odoo and other ERPs, they felt that Frappe Health was the right solution to satisfy their requirements.

The aim for setting up Frappe Health was to position it as a centralized platform for maintaining data pertaining to newborn hearing screening information. This allowed individual birthing clinics to accurately monitor the status of screening from their local perspective as well as to aggregate data for the generation of invoices sent to localities (cities and towns) for screening test reimbursement. Additionally, the system was also accessible to follow-up testing hospitals, public health offices, and the Hearing and Language Center with each having granularly controlled access to data and system functionality.

The users at birthing clinics were required to have an interface in Japanese for getting the infant data registered in the system along with relevant vital details. They were provided with ways to configure their clinical procedure templates in the system and reuse them while getting infants registered. While getting the infants registered in the system, the system was required to read and decode the QR codes provided to the patients by authorities. All the localities coming under the prefecture were incorporated in the system. In order to maintain data confidentiality and integrity, user roles and permissions were applied appropriately.

In the event of a referral on the NHS test, the infants got referred to a hospital where a follow-up test was conducted. There are four official follow-up hospitals in the prefecture.

At the end of each month, clinic staff was required to generate invoices to be sent to each locality (city, town, village) associated with the residence of their patients who got screening that month. The system was required to find all tests administered during the specified time frame, for the specified locality and generate an invoice to be sent to that locality for reimbursement.

Each birthing clinic required access to a dashboard to provide some simple data analysis for their respective clinic.

Typical users of the system

The patient entry form in Japanese was customized to get infant data recorded in the system through birthing clinics. The form contains some of the important data fields such as Hearing Id, DoB, Locality, Testing Clinic, Screening Test Name, Screening Result, Referral Hospital etc. 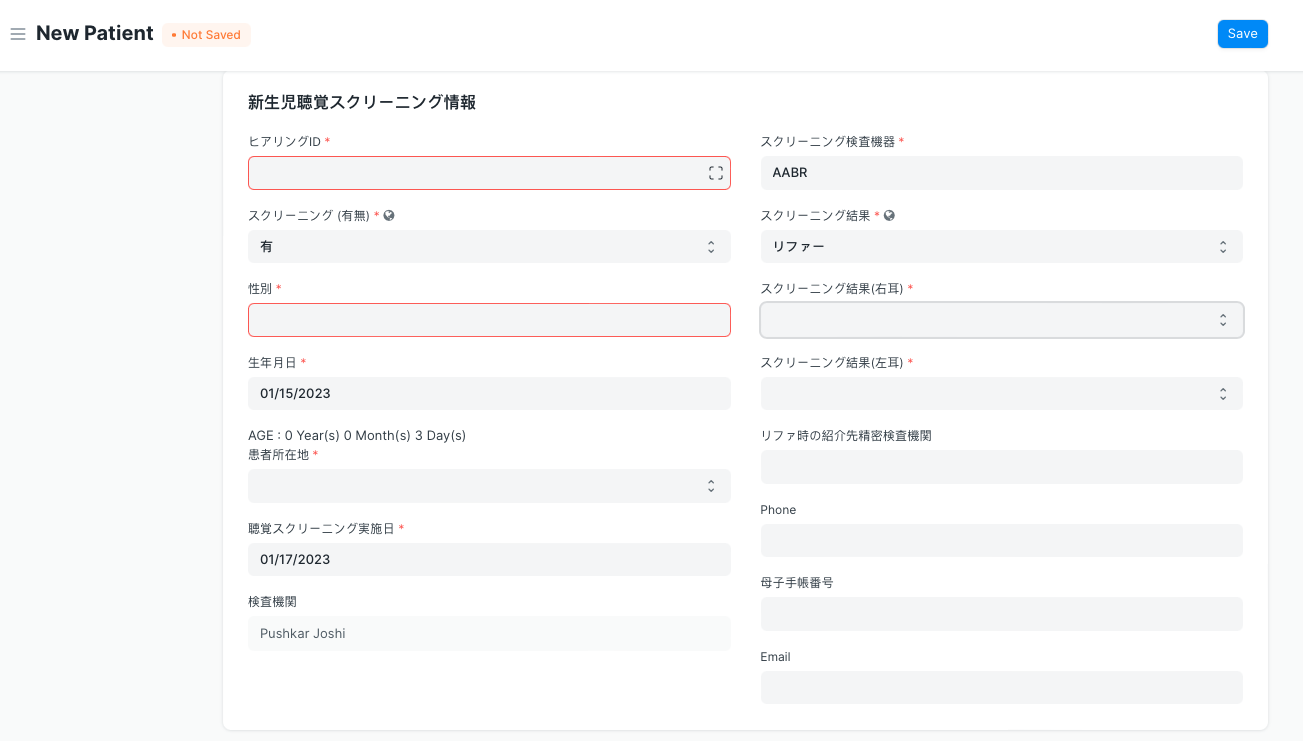 The flow for Patient Encounter was setup for the referred patients where they can undergo follow up tests with the respective practitioner in patient encounter and get confirmation on the diagnosis. 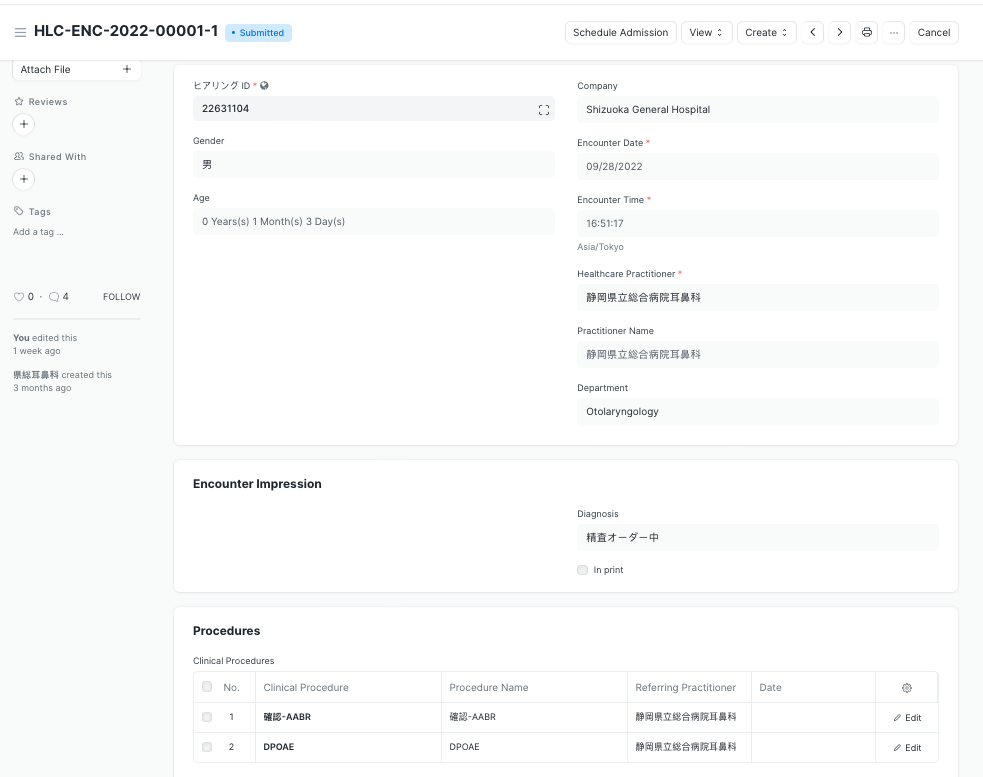 The system was customized to generate bulk invoices automatically at the end of each month for every combination of Birthing Clinic and Locality. This helped birthing clinics get reimbursed from the localities based on the number of resident infants tested in each category. 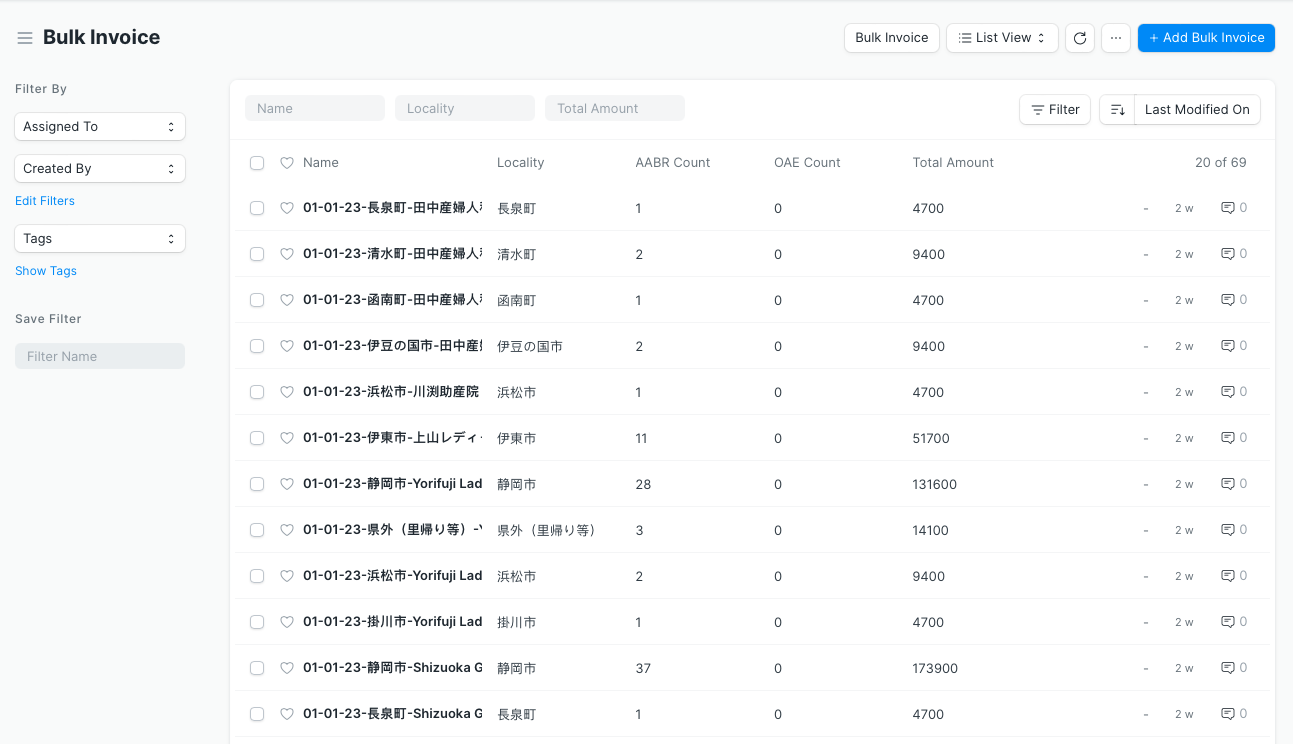 Even though the project had unique requirements, its scope was very limited. The project commenced after a kick off meeting involving concerned stakeholders from both sides in which the overall project execution plan was discussed along with tentative timelines.

A staging site was setup for the project champion to upload data and execute all the use cases based on the scope of work. Any configurations or customizations done by the Frappe Health were also hosted on the staging site for the customer to verify and confirm.

A seamless collaboration between the Frappe Health team and Project Champion is the key for attaining success. Jason Hollowell was appointed as the Project Champion who has been associated with the hospital as a PHD researcher. The team got along with the project champion quite well. Jason was the only multilingual person at the hospital who was able to communicate with us in English. This definitely induced a lot of dependency on him but the impact was mitigated due to adequate planning at both ends. Since this was going to be a remote implementation, the Frappe Health team had scheduled periodic meetings with the project champion to ensure hasslefree project progression. The collaboration methods set using different tools facilitated collaboration between both parties in order to fix any queries. Due to language barrier, project champion led all the demo sessions with the end users and reported any queries or concerns to the Frappe Health team.

Once the scope of the project was covered, the Frappe Health team got engaged with the project champion on the UAT phase. This is considered as the most important phase in any project as it is useful in ensuring complete satisfaction of the requirements. This is the phase when any unattended issues or bugs get resolved before making the system live.

After getting UAT sign off from the customer, the project was made live by migrating the data and customisations to the production site.

The project has been deemed as an absolute success based on its completion timeline and customer satisfaction. After going live in September 2022, the project has been widely accepted by the end users for managing their activities digitally in Frappe Health. This might have opened the doors for Frappe Health in the Asia Pacific region. 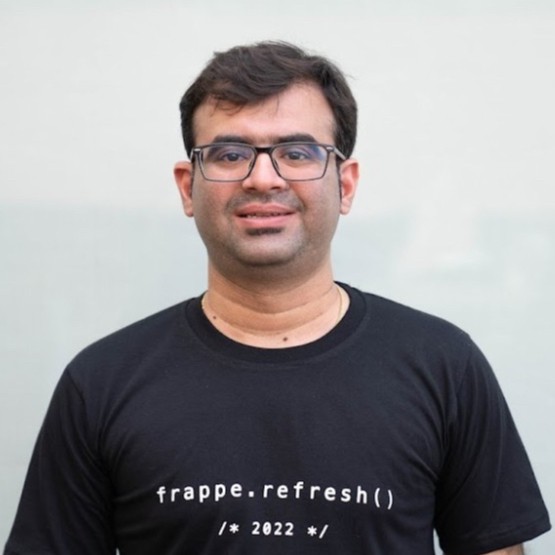