Frappe team trips are usually an emotional affair. This time things were different.

Frappe team trips, which are usually three to four day outings with the entire team, are always an emotional affair for me. In my own bubble, we are on the way to being one of the great companies of the world. But when I get a chance to meet my team up and close, a certain “shattering” happens. Nobody gives a fuck about greatness (at least to the level I do). Founders are called “dream merchants” and the recurring theme is that I am unable to “sell” my dreams to anyone. It does not help that I am usually not a very aggressive person by nature. I don’t like people telling me what to do and neither do I feel I have a right to tell them. So I tend to repress my feelings till the point of outburst. We are doomed to mediocrity and failure, and there goes my dream. Boom. Tears.

But the outcome of such trips is usually not so bad. Some of the emotional drama hits home, and I think we do end up understanding each other much better. Passion is infectious and the dream does actually sell. Well, a little bit at least. Greatness is alluring. People have fun, travel, know the people whom they work with and the culture gets tighter. This was essentially what happened in our first three trips to Goa, Wayanad and Mussoorie. But this time it was different.

The year 2020 has been very unlike every other. Old habits have been broken, inner truths have resurfaced. There are no gruelling train rides, no junk food, no sugar rich tea, no office chatter and very little drama. The dust is settled, the grime forgotten. We have been given a chance to be born again.

A few important things also happened this year. First, our schooling experiment started to come off really nicely. I started seeing my children as individuals who can be trusted to make their choices. I stopped forcing my choices upon them and it meaningfully changed our relationship. Now parenting was no more a pressure, and by releasing them, I released myself.

The second important thing is that we found someone who aligned with our values to back us. Entrepreneurship had been a lonely battle. Without external investors or runaway success, it was hard to believe in our own success. It's as if we were unable to convince anyone that this company might actually succeed. But this year, someone did. Over the last year I got to know the team at Zerodha, especially Kailash really well, and it was clear that we shared a very similar value system, connected with our love for free and open source software (FOSS) and genuine wish to build a better society. Zerodha’s faith and decision to make a reasonable investment in Frappe brought a new energy in the team. More than the money, we needed the confidence that what we are doing, even if it is unusual, might probably work. It does no harm when your backer is one of the most admired startups in the country.

The third was that Sandeep Shekhar (a.k.a. Big Money Bob, as he likes to call himself) joined us in a sales leadership position. Over the years, we have never got sales right in Frappe. It did not help that I have been a sales skeptic and my own feelings about sales had been shaped by pushy salespeople over the years, ready to trick you into buying something you probably did not want to buy. I had no eye for sales talent and no understanding of what sales actually did. I realized this only after we got Sandeep on board.

It helped that Sandeep and I are totally complimentary. If I am a whimsical but passionate founder, Sandeep is methodical and relentless. If I am usually unclear and filled with self doubt, Sandeep is aggressive and confident. Now we had someone on the team who was more driven than myself and this changed the dynamics of the team. With Sandeep on board, I did not need to be aggressive and I could take up a more complimentary position that played to my strengths.

On top of this, all of us were coming from a lockdown. We are by and large a young team, and had hardly met over the last one year. It was going to be weird just to see so many faces together! In the weeks leading up to the trip, we had meetups in Mumbai and Bangalore, so I had met most of the folks. But even then seeing everyone in one place was quite a feeling! Since we were in a pandemic (specially due to a revivial in cases), not everyone chose to come, but we were glad that 40 people got themselves tested and joined for the trip. The pandemic also restricted our choice of destination and we chose a resort off Pune that was large enough and had space for us to talk and play.

So with all this buildup, I had zero expectations from the trip. Like everyone else I was going to explore what was about to happen. We basically had two sessions, an opening one and a closing one and everything in-between was unstructured. People could do what they wanted. Talk. Play. Party. Sleep. The opening session, where we introduced ourselves, felt a bit forced and formal as you would expect, but by the time we closed, most of the inhibitions were gone and the conversation flowed a lot more cleanly.

I think everyone had a very unique and unexpected trip. Personally for me, apart from those few awkward moments, when people were trying to figure out the appropriate way to behave with their boss, most of it was lots of fun. Endless conversations, playing football and pool, climbing the hill, lack of sleep, dancing and singing, the bus ride, breakfast and dining, design workshop, team discussions. 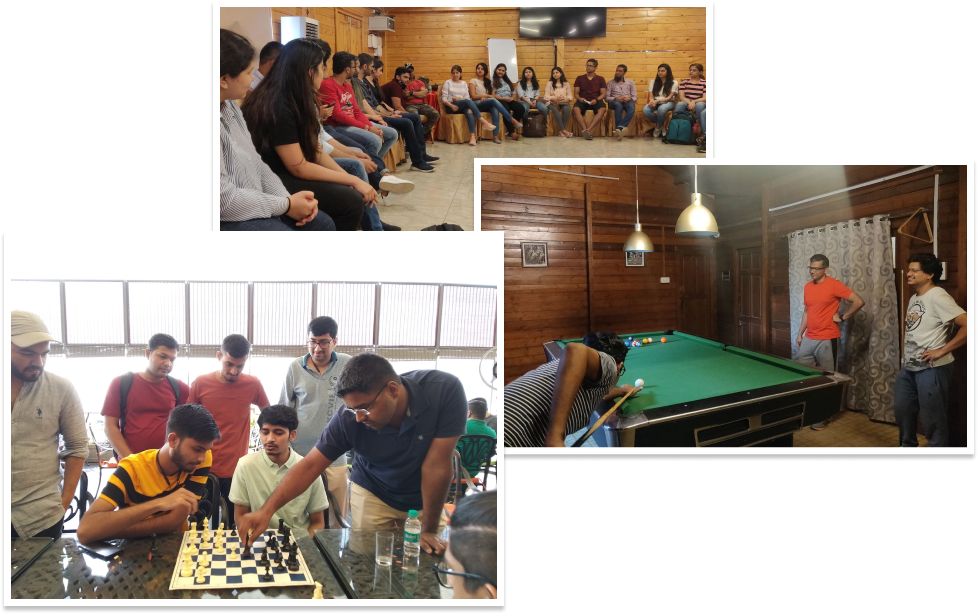 Most importantly I got to know a lot of the people a lot better, I think we hit the space where it felt like we are more friends than colleagues. The space where you genuinely care about each person and you want them to succeed. The space where your own success ceases to matter as much. Aditya, who usually comes up with the sharpest insights, summed it up nicely, “I fear we are losing our edge”. Things did seem too good to be true.

I have been through many journeys and I know things will not always be so good (or will they?). On a journey as long and ambitious as this, there will be disappointments and betrayals, people will behave immaturely, we will make some wrong decisions, people will move on. But on this trip, it felt that nothing mattered more than the moment we were in. Maybe it was the lockdown effect of staying away from people and meeting them all at once, or the series of fortunate events leading up to the trip, but the past, present and future, for once felt at peace with each other.

So for a change, I felt totally lost for emotions at the end of the trip, mildly intoxicated and fully aware. Like a well baked meal, it felt nutritious and wholesome. Greatness, I felt, could wait for another day.

You won it all here - So for a change, I felt totally lost for emotions at the end of the trip, mildly intoxicated and fully aware. Like a well baked meal, it felt nutritious and wholesome. Greatness, I felt, could wait for another day.