Evaluating performance and setting compensation of your colleagues is the toughest job in the company. Does it have to be that way?

Any process that tries to put a precise number on an ambiguous value, is doomed to fail. By putting a number on someone's contributions to the company, one is called upon to directly judge the value of someone's skills, attitude and efforts. Not only do these numbers become a reflection of one's own contribution, but they are instantly compared with peers, colleagues and even society at large. Suddenly this number becomes a statement of one's contribution to not only the company, but the society at large. This is grossly unfair.

Over the years at Frappe, we have not evolved a system to determine compensation, and it is one of our weaknesses. For the last few years, a few senior members used to huddle for a few hours and "set the numbers" right. My personal views as founder and CEO became a highly influential input. Last year, to increase transparency, we took a major step of announcing everyone's compensation and raises to the entire team in a meeting. The team was clearly shocked to see the numbers, but did accept them and thought that they were by and large fair. This time, we went further. Instead of huddling in a room to discuss everyone's performance and raise, we had a public discussion. 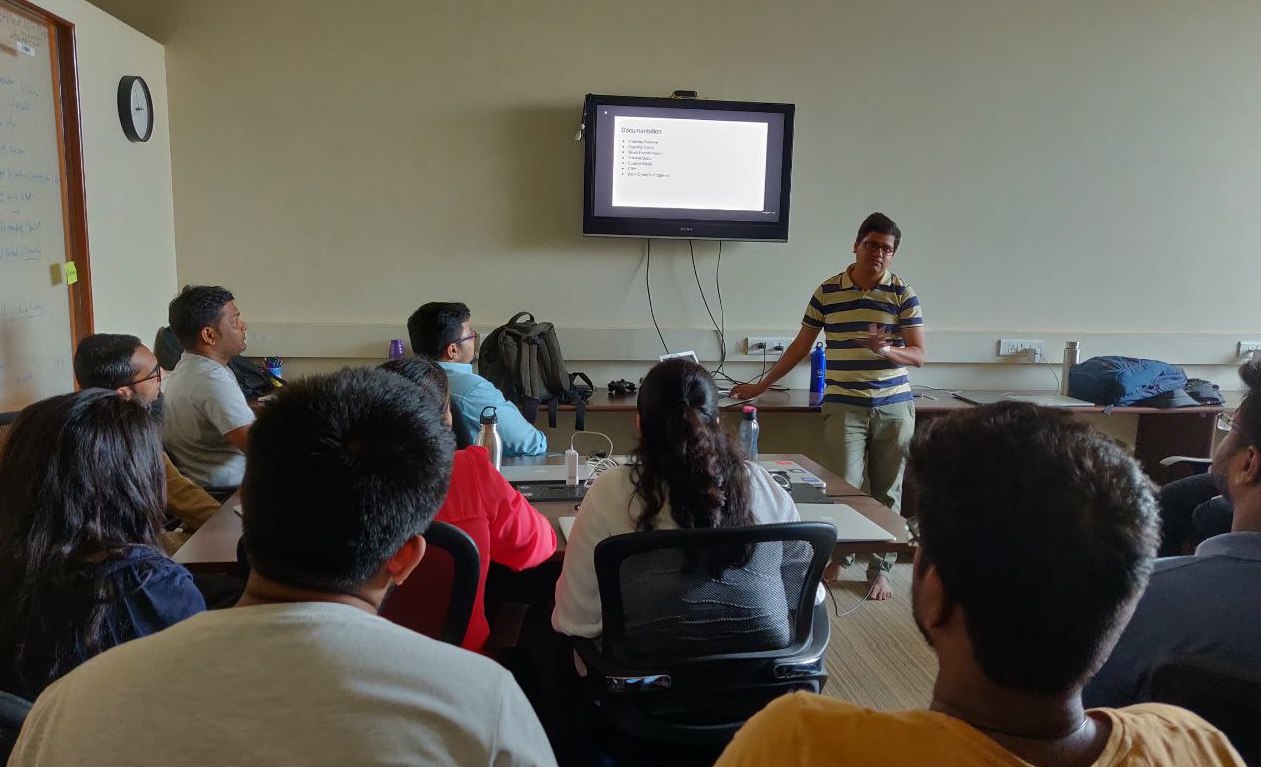 Since we were all under lockdown, this happened over video calls. (Memory of face to face group discussions are getting foggier and foggier, the picture above not withstanding). In the first round, we looked at each person and discussed their performance based on their delivery, teamwork, leadership and quality of work. These were added up to bring a number that was the overall rating of that individual. Since we put 10 points to each parameter, the total would come to 40. This exercise took almost 5 days.

These calls were mostly fun. Everyone came in to cheer up their colleagues and put in a good word for their amazing contributions, while I was the bad guy, trying to point out the short comings. Much of it was fair. I don't directly work with everyone in the company, so I am not sure of the effort put in by everyone. But I did have to remind people that these ratings have to be fair, pointing out both positives and improvements. The number setting was also more or less collaborative. Some of the discussions became argumentative, but this was less than 5%. Most of the time, we were all in agreement about the rating. A few of us seniors did feel that the rating was on the generous side, but within the margin of error, as these numbers can never be precise.

Before we started to revise everyone's pay, we decided on an overall raise based on our budget and expectation of next year's revenue. Frappe's revenue grew by 55% the year before, and we expected a similar average for the next year. The state of global economy in 2020 is terrible due to the sudden stopping of economic activity across the world. While we believe our platform is set for rapid growth, we need to adjust our expectations. It was decided that the average raise would be 20%.

Next we started the process of setting the revised compensation for every member. Here is I think where we did not have any plan in place, and started to falter. As the previous years, I started putting numbers next to everyone based on my judgement and discussion of a few members who participated. Seeing the numbers immediately triggered a sense of unfairness in many people. The discussion went from constructive to argumentative.

Since we have grown quickly and hired rapidly in the last couple of years, the team at Frappe can be broken up into three cohorts:

The Seniors all enjoy higher salaries, so the overall raises were smaller in percent, but bigger in absolute numbers. The Freshers had not even completed their first year, so their raises, while bigger than the Seniors in percent, were small than the Juniors. The Juniors got the best raises both in percent and reasonable in terms of numbers. The Juniors had survived their first year at Frappe and even those who took time to find their feet, were starting to align and deliver.

Within each cohort, the raises were fairly evenly distributed based on the performance rating. There were some exceptions made if the base pay was unfair or if there was an exceptional case that needed to be addressed. One by one though, people began to question and speak up. Over the next three days, we patiently heard out every member and tried to explain the reasoning behind this kind of a model (based on cohort and performance).

Some of the conversations also became petty, specially when repeatedly the same point was being made. Someone reminded everyone that these are the same people they have to work with tomorrow. But overall, since we heard out everyone, most people were satisfied with the model. They may not have been totally convinced, but considering there was no alternate model, they were okay with the numbers. Scrutiny, oversight and transparency carried the day.

This exercise brought out a lot of flaws in our organization and thinking too.

In conclusion, the exercise was eye opening. Frappe is a very creation driven team and not enough weight is given to delivery. The world measures us by delivery and money and not effort, and we have to accept this. Maybe Frappe today is more ready to capitalize on on its assets than before.

After this exercise, I think we will definitely be a lot more revenue focussed, and this will bring a welcome balance to the way we approach our job. We also need a more comprehensive model for compensation. I think cohorts, performance measures, peer review are all important characteristics, we just need to make things more clear and structured.

Maybe even after having a better compensation framework, somethings will still be left to judgement and bias. People also have to realize that compensation is not a final judgement, but an ongoing conversation, that can be opened at any reasonable time. Such conversation also helps people understand others, specially who belong to different cohorts. That itself is a big victory.

A
Bulbasaur 1 years ago

Why is that guy not wearing any footwear?

Your effort at transparency and inclusive decision making, while laudable, is very different from how the industry operates and fraught with uncertainties, but that is no reason to avoid doing it. As you rightly said, putting numbers to value can be a sensitive issue. The exercise is easier if the expectations are first set and performance assessed against those expectations. However, expectations need to address - both routine day to day essential tasks as well as higher expectations such as leadership, creativity, research etc. Will be interesting to see how you negotiate these uncharted waters.

Would the discussion have been different, if instead of 55% yoy growth, Frappe has a way to grow consistently at 155%?

What amount of time is spent in increasing the size of the pie versus distributing the pie?

B
R becht 2 years ago

It is very rare that a company gives insight in such sensitive discussions related to performance and payment. Complements.