How to start a movement

Notes from Offsite #6, where from a company, we became a movement.

As a part of a survey of startup founders, I was asked recently about my biggest leadership challenge, and the answer that came to my mind was “building trust”. Let me unpack this statement. Each one of us is brought up from childhood taught that we have to obey certain “authorities” and in return we get comfort and safety. Our obedience is bought through an intricate web of lies that can take us a lifetime to untangle. Our industrial education system converts us into standardized resources that can be plugged into command-and-control organizations. Nationalism and religion are another set of “systems” of control based on fiction and myth. As we have been indoctrinated since childhood, we accept these systems as truth and acknowledge their benefits and turn a blind eye to their faults, but deep inside, we know these are lies. We know that no one is telling us the truth.

People start companies for various reasons. These could be people who don’t “fit” in the well defined systems and are sometimes forced to start on their own. Others are primed output of the system and are backed by venture capitalists to exploit the next big opportunity. Some do it for money, some for glory. When these people create companies, these personal ambitions have to be replaced by a bigger goal. They have to create myths about their companies. Stories that create a sense of purpose for everyone working for them. In the end, for most companies, this purpose is just another lie. Much like the lies they are used to all their lives. And it’s okay because that’s just the way the world is, and as long as they benefit from it, why not?

The beginnings of Frappe would not have been much different. Maybe I would have never made a good employee, so it was best that I started my own thing. When we hired people, our goal was never bigger than just solving problems and surviving. While I had lofty dreams right from the beginning, within a few years, it was clear that the road was going to be much longer, lonelier and rockier than I had imagined and the dream quickly faded. Slowly we just settled in doing the grind, with Nabin, Umair and Prakash as constant companions, with others joining and leaving as they found better options. But over the last few years, with the backing of the community, we have had the opportunity to dream again. To dream of something big, something glorious.

This time though, like a phoenix reborn from ashes, this dream has come in a much different form. Rather than just go for money or glory, we want to do something bigger. Remake capitalism. That sounds crazy and probably is, but it is a product of our journey. Over the years we have seen several startups grow and become monstrous unicorns and then do stupid things. We have been exposed to the ascetic world of Free and Open Source software whose pantheon of gods include the likes of Linus Torvalds and Richard Stallman who have proposed a more radical, liberated and equal vision of the world, where everyone can use the software we build. Along with this, we want to build products that are an epitome of excellence and create delight in everyone that uses them.

If this was not enough, we want to rethink how companies are run. We believe that a company is a community not an army, and much like other communities they must be run by consensus. A community where growth is not the most important measure of success. A community where everyone has an equal voice. And we want to do this in a society and environment where companies are measured by how much they are valued and the money they raise. It is this crazy idea that we want everyone to believe in. Obviously people are not going to trust so easily.

So here comes the leadership challenge. How to make our own people believe that this is real. To people who have been brought up in a web of lies, this seems another beautiful lie they can believe in as long as it gives them safety and comfort. But the true fructification of this vision will happen when those who are in Frappe believe this, not as a beautiful lie, but a vision and reality that they must imbibe and defend. In short they must be liberated. Our goals are audacious (quixotic, some may say), remake capitalism, rethink how companies are run, and this can only happen when people are truly liberated and believe in these ideas, not just as another system but as something that runs in their blood.

While I have been talking about these things, I don’t think anyone really believed in them. Like I said, these were beautiful lies they were happy to go along with. I don’t think anyone even cared. Do we even question these things? Let’s just obey, do our thing, stay out of trouble and collect our pay. I am sure most people live like this. I think most people except Aditya.

I remember Aditya came in as Shivam’s friend to intern at Frappe in early 2018. Shivam was the extrovert, popular college kid at the Don Bosco Institute of Technology (DBIT), where we do our annual Hackathons, and Aditya was his introverted, nerdy sidekick. They complemented each other well. Shivam was the front-end artist and Aditya was a backend architect. His internship project was getting Frappe and ERPNext ready for Python3 and he quietly went about knocking off issues that stopped ERPNext from running on Python3. Both Shivam and Aditya were enthusiastic kids and it was a natural decision for us to offer them full time positions at the team.

At our 2019, offsite in Wayanad, we were sitting in a circle after dinner. Some people were bored, some were simply counting the seconds till they could party in their room, and a few were hoping for some fight and drama. We fidgeted around trying to break the ice. As the founder and the authority figure, most people would have been afraid to ask me any tough question. But at that point, maybe bored, definitely skeptical, Aditya asked me the most important question. Maybe a question so obvious that everyone should have asked at some point. “Why does this company even exist?” - that was the spark that triggered a really important discussion. I did not have a specific answer. Maybe it was too crass to say, so that we can all be rich. We concluded that the company does not exist for any specific reason. It’s just art for art's sake. That was the best I could answer at that point. The contours of the new vision were just beginning to take form.

Over the years, Aditya has been a constant interlocutor, always probing me and trying to bring out better ideas. We have continued to build on the “art for art’s sake idea” adding excellence and liberty to the list. Ultimately the purpose of art is to reveal something about the fabric of existence, that is what makes art excellent. As my own explorations in the education of my children (we pulled them off regular school) opened my eyes to the systematic domestication of our lives, I started to push some of these ideas to Frappe. Liberty. Equality. Democracy. One-person-one-vote. Choose-your-own-pay. Don’t-be-evil. Most people found these ideas radical but Aditya was a constant crusader by my side. Slowly but surely, over the past year, we have pushed through a lot of radical reform. 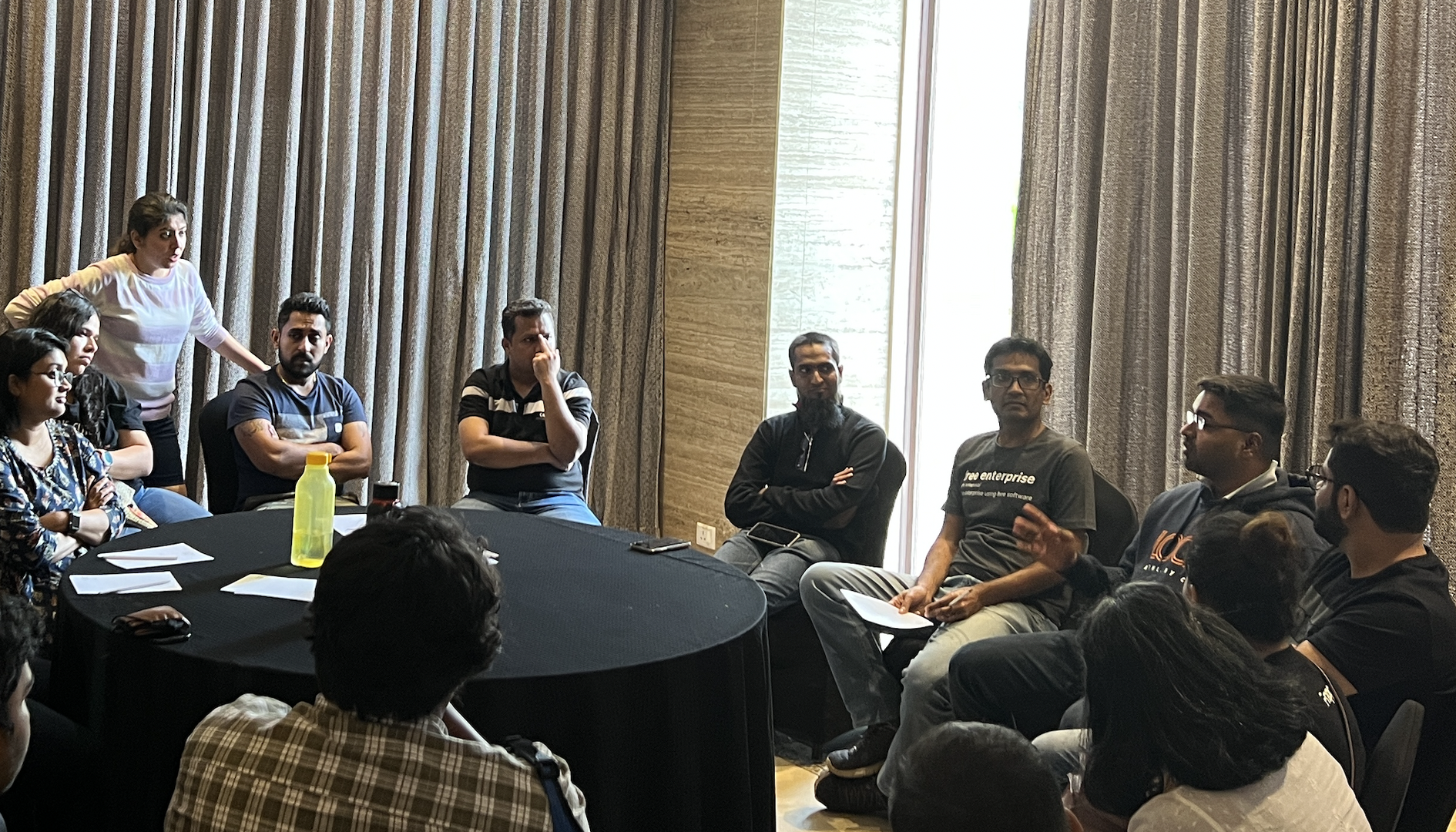 The tables turned at this offsite in Lonavala, where the conversations we started at Wayanad reached the next level. This time, it was not me but Aditya who was on the offensive. He was loud, passionate and eloquent. Much more than I had ever been. He also had a lot more moral clarity about things. This was the moment we had become a movement. Derek Sivers has this brilliant YouTube talk, that you must absolutely see if you never have, where he says that the first follower is more important than the first mover.

This is because the first mover is probably crazy and just experimenting with abandon. It is the first follower who actually sees what is good about the crazy first mover and starts following. Slowly more people start seeing what is really happening and the risk from following the early adopters gets lesser and lesser. This is why the first follower is more important than the first mover. By becoming the first follower, Aditya has suddenly raised the bar for us. With Aditya taking the dive, we immediately had another believer - Michelle, who had joined a year after Aditya, and has recently stepped up to take responsibility for setting and executing the business plan as the Chief Operating Officer. Michelle has been a powerhouse at Frappe who has championed the implementation and certification of quality and security systems. While Frappe is a team of stellar performers, these two have really stepped up and taken big risks by believing in the crazy vision that Frappe means something bigger. I can’t imagine when more people start taking risks the way these two have.

This I think has been my biggest leadership challenge and success. As a leader, everything I do is watched, dissected and scrutinized against all past claims and decisions. Maybe I just passed some test that made me a “trustworthy” leader. It was a difficult test and I clearly took my time to get ready for it. Over the years, I have mostly been an often absent, often whimzical leader. But in the past few years, my own vision and ideas have been crystallized in a way they appear coherent and worth fighting for.

I am sure, one by one, a lot of people are going to be liberated and our connection and bonds are going to grow stronger as a team. What seems like a beautiful lie, might just end up being a reality. Our vision is a more liberal and humane version of how our society should be. The question is not about this vision, but whether this is just another lie to make ourselves and our shareholders rich, or do we really believe this to be our goal. I think we have just begun to see beyond ourselves and look at this broader vision. I know this vision will continue to be challenged every living minute in a society where unicorns are birthed every few hours and consumerism lurks behind every click. But our revolution has just begun, and at this point, it feels unstoppable.

[1] A company is a community. [2] Starting a movement to grow the company. Let us see if these 2 ideas are part of another big lie or an innovative path to business success.

A
Cannabis Equipment Financing 8 months ago

This is where you lead. I make sure outsiders see more than just the leader. I am starting a movement...many movements actually that will aggregate into one movement in the future.

Glad that the young kid bought up that question. "Why do you even exist?" The answer(s) is/are not easy to come by. Though opens up a lot of avenues of thought and helps you think radical... Kudos to grooming such minds....