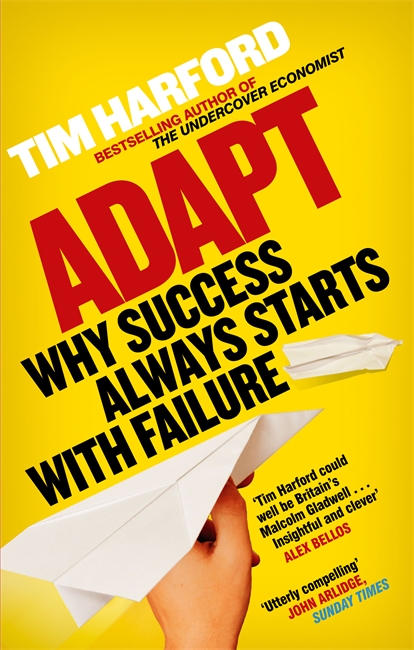 Did you know that a toaster consists of about four hundred components? Yet, it is one of the simplest devices out there. The modern world is highly sophisticated. It has complex problems like insurgency, economy, climate change, banking, etc. What's more, such problems also evolve with time. How do you deal with such problems? Tim Harford urges us to apply nature's algorithm to find innovative solutions - to try different things and select what works - to adapt.

Producing a sweet, fizzy drink is a static solved problem. No further experimentation is necessary, and it is perfectly possible to set uniformly high standards in the production of Coca-Cola.

However, such 'Coca-Cola problems', as he calls them, are increasingly rare in a rapidly changing world. He enlists three essential steps to successful adaptation:

He guides us through the requirements for adaptation - conflict, variation and selection, using numerous anecdotes and analogies. He recounts the story of Peter Palchinsky, differences between US strategies for the wars in Vietnam and Iraq, the 'Skunk Works' experiment that gave birth to the Supermarine Spitfire - a fighter plane that played a crucial role in World War II and the importance of charter cities like Shenzhen and New Songdo, where innovation can be carried out in isolation. In selection, he also highlights the problems of patents as a reward, and argues that prizes are a better alternative to motivate innovation.

Since failure is an expected outcome of a trial, it is imperative to be able to survive it. Comparing our financial system with nuclear power plants and oil rigs, he urges us to have safety systems in place, so that when the dominoes do fall, the various parts of the system are sufficiently decoupled to not come crashing down on each other.

It should have been possible to let both Lehman and AIG collapse without systemic damage.

So far, the book was very informative, though a bit dry. To me, the situations described made sense only in hindsight. I couldn't relate to it. However, the book took a turn in the final 40 pages. Tim puts light on the characteristics of adaptive organizations using examples like Whole Foods, Timpson, W. L. Gore, Google and Virgin. The ideas are relevant for most organizations and the knowledge of the previous 200 pages helps you accept such ideas. In the chapter - Adapting and you, he tells us the story of Twyla Tharp's attempt to create a new kind of show - a combination of ballet and musical. Here, he elucidates how difficult it is to realize that you've failed. Her journey from identifying failure, surviving it, making changes and finally, the success at Broadway, encompasses the essentials of adaptation.

In the context of ERPNext, this paragraph really hits the mark.

Disruptive innovations are disruptive precisely because the new technology doesn't appeal to the traditional customers: it is different and for their purposes, it's inferior. But for a small niche of new customers the new disruptive product is exactly what is needed. They want smaller, cheaper hard drives, or cameras that produce digital files, or email that you can access on any computer - and they are willing to tolerate the fact that the new product is inferior to the old one along all the traditional dimensions. That foothold in the niche market gives the new technology an opportunity to develop into a true threat to the old way of doing things.


ERP implementation requires a thorough understanding of operations of all departments. It is a complex problem and hence, could benefit from the ideas of this book. There is a possibility that you will fail in your first attempt. But due to open source ERPs like ERPNext, such an attempt does not dig a hole in your pocket. And, if you succeed, you would know that you have adapted, you have risen.
Published on September 2, 2013