Pricing for free and open source product support is a particular challenge. People generally don’t expect to pay for anything (free software), so the expectations are really low. Over the years, it has been a challenge to design the right kind of support offering with the aim of providing great support to our customers and ensuring sustainability of the project itself.

Pricing has always been something we have never really got a grip on and we have run numerous experiments over the years. As we launch our new pricing, here is a quick recap of our pricing experiments and how we got here. 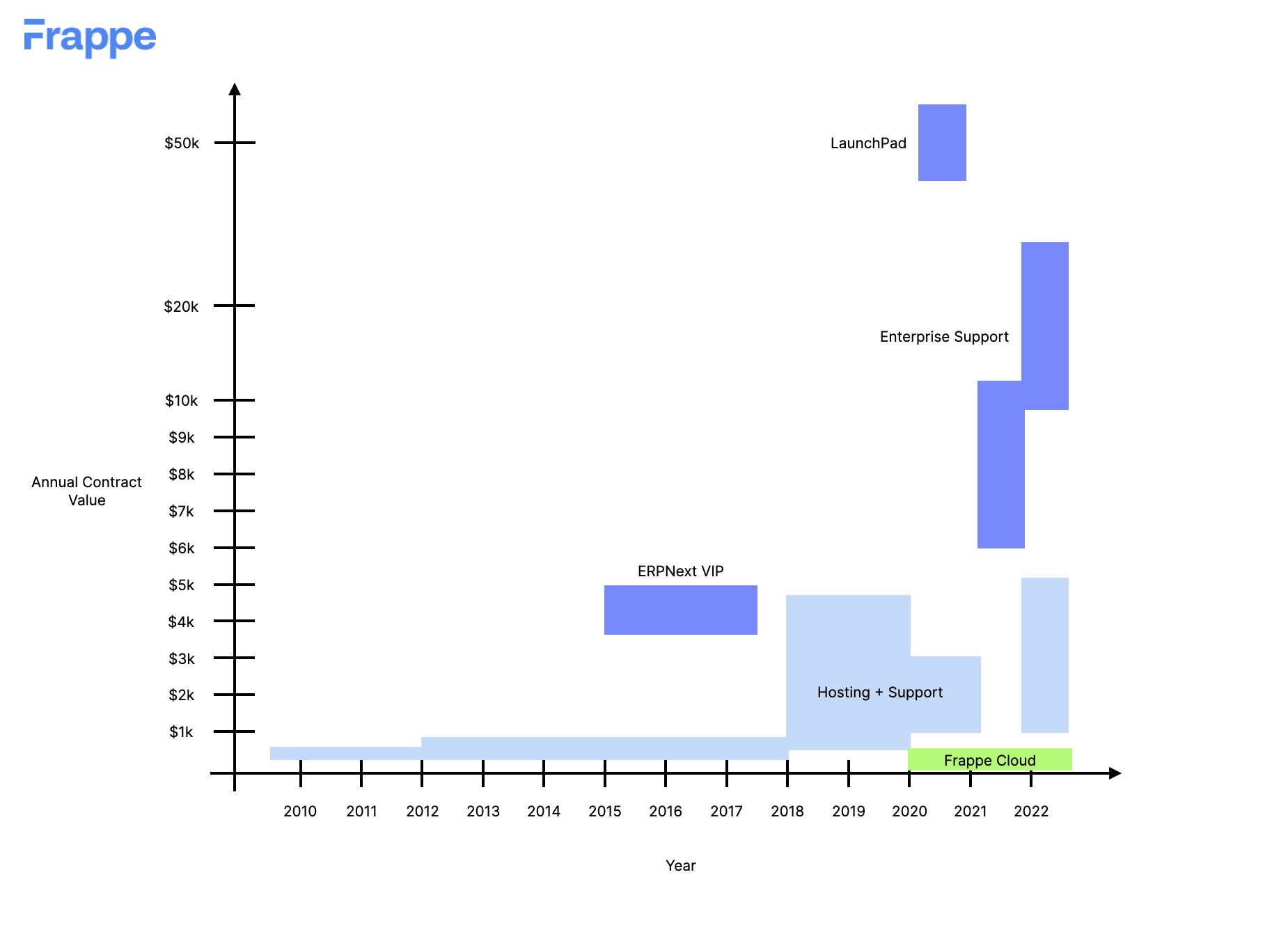 When ERPNext was launched in 2010, we started with a simple price of $7 per user per month. This was at the absolute low end of the market. We had hoped that with such low pricing, we would attract a large number of small companies who needed more than just an accounting system to something that was a lot more sophisticated and robust and helped them in managing their orders and purchases. We persisted with this pricing for maybe 2-3 years and while it brought us our first set of customers, it wasn’t really working for us. Just from the top of my head, the top 3 problems were:

In the 2nd iteration in 2012, we ended our monthly billing in favour of a simple, flat billing at $99 (single user), $299 (5 users) and $599 (20 users) annually. These plans still attracted the same of audience (small business) but worked really well for us because:

Point #3 was a revelation. We did not anticipate that by paying a bigger amount, customers showed a lot more keen-ness to implement the ERP. It was easy to see in hindsight that money brings attention. Our annual plans seemed to be classic and while we had many different tiers over the years, this remained "bread and butter" revenue for us.

Inspired by the Wordpress VIP plan, we introduced a new VIP plan for $5000 per year that included 50 hours of consulting and development. An unlimited user option for $3000 per year was also added.

This was a reflection of the fact that we had started attracting companies that were willing to pay us more than a few hundred dollars and our first indication that the market for ERPs in the mid segment would be far more lucrative than the one serving very small companies. We continued to bill for our older customers on the 2012 plans.

In 2016, the new version of our multi-tenant platform (Central) was launched and this helped us get more flexibility in how we could configure sign ups and plans. In 2017, we introduced more tiers based on the same annual payment plan, but for slightly more users.

In 2018 and 2019 we rationalized this again into 3 plans (Basic, Standard and Pro). Things more or less remained constant on the support front. Our consulting team did everything from sales, onboarding and support, and we called them full stack consultants.

While we were getting inquiries from larger companies, 2020 was the first time we started addressing two separate markets, one for mid-sized and larger companies and one for smaller companies. We also lauched a brand new hosting focussed product "Frappe Cloud".

Beginning from 2020, we started understanding larger companies a lot better. They needed a lot more support, implementation and customization. We decided the “middle” zone was the worst to be.

2021 was a COVID year and we went back to a per user model for enterprise support. The gap between Cloud 2020 and LaunchPad was just too big and we realized that if we have to go to enterprise we have to price it as the market expects us to price - that is per user.

We started pitching a price of $300 per user per year for enterprise customers mostly driven by sales. This was the first time we had a functioning sales team and we started qualifying customers based on their ability to pay. We decided to leave out the smaller customer for partners who could use Frappe Cloud and provide support to the SMB customers.

Most of our inbound customers still came back from the open source funnel and pitching a per-user pricing was becoming a challenge as we had said in the beginning that people come to ERPNext looking for a bargain. This year we decided to ditch the per user model and go with a module wise support for unlimited users starting at $10,000.

This year we also finally shut down our 2015 cloud platform (Central) and migrated to the new platform (FrappeCloud). FrappeCloud is very superior to Central because we were able to launch and manage custom apps and marketplace. This again opened up a gap in our pricing, so we are back with ERPNext.com Support plans for SMB! 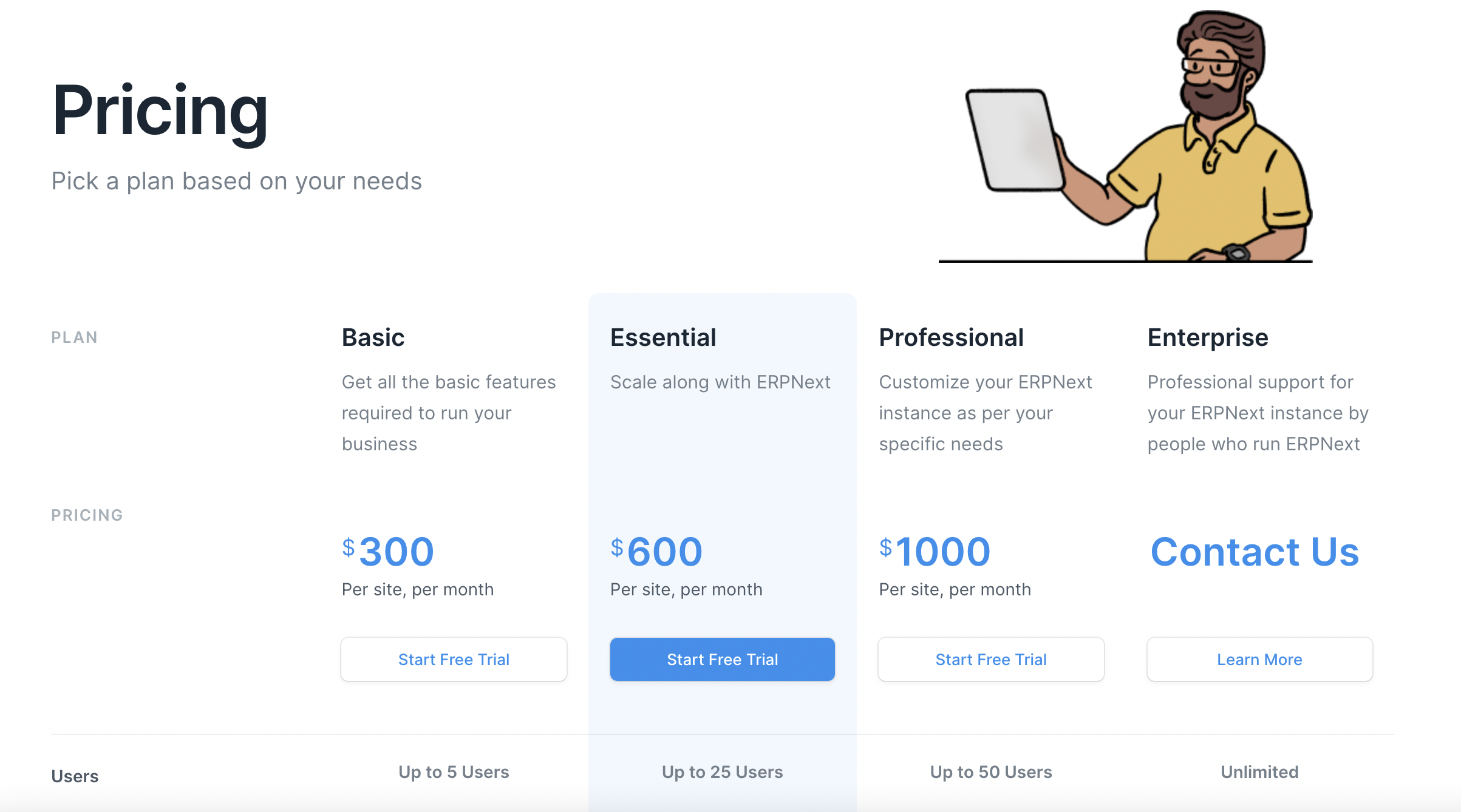 As Steve Blank says “a startup is a search for a business model” and over the years we have tried various options to find the right fast growing model for us. While we do grow at an average of 50% every year, it’s been “slow” compared to many of the fast growth SAAS startups we have seen out there.

In the last couple of years, we understood larger companies better and realized that we need a strong ecosystem to address them while we as Frappe focus on core product support and hosting. Hopefully this time we are wise and chastened, or are we? Only time will tell. To be honest we don't have a lot of idea about it, as we address a lot of different markets and their needs while we look for the "hockey stick" growth curve.

While you are here, don't forget to checkout our new Support + Hosting plans at ERPNext.com

Great following ErpNext and all the twists and turns, but I wonder if the hockey stick moment is eluding you because you seem fixed on the idea that your own work and effort will deliver that success for you, in the SMB market there are thousands of small developers/support businesses providing software/telephony etc to SMB's usually within vertical markets known to the developer. The pricing structures tried over the years seem always to have a been a barrier in adopting ErpNext, a simple idea would be to remove the 'one site' rule from Frappe Cloud, if billing is based up server usage then what is the purpose of the per site billing, currently it immediately places a barrier to entry but what benefit does it give Frappe. Getting ErpNext up and running on an in house server is such hard work and for sure this area is exactly what you should be doing and leave the SMB client/market to those with the knowledge and experience within them perhaps?

Great article. For us Frappe Cloud was just the perfect solution to start our company already with a fully featured ERP System. So, no matter how fast and in which direction we grow our ERP System is ready for it. Even better, when we grow - not only is the ERP system ready, there is a whole eco system of experts to fullfil our needs in customization.

Truly, this article is really one of the very best in the history of articles. I am a antique ’Article’ collector and I sometimes read some new articles if I find them interesting. And I found this one pretty fascinating and it should go into my collection. Very good work!

I
Issam Siddique 2 months ago

Have you been tempted to stay away from the lowest end of the spectrum and instead focus purely on the bigger customer segments whom you have started to understand much better now? What are your thoughts on catering to both ends of the spectrum using the same product? Will be curious to know. Thanks.

We could collaborate (www dot yagnaworld dot com) to provide ERP, Hosting by Frappe and Management Consulting by YAGNA for leveraging the investment in ERP to derive significant financial returns for the user enterprise.

Refer Necessary But Not Sufficient - Novel by Dr. Eliyahu Goldratt.

The pricing would have Low Fixed and High Variable Fee linked to Results. Yagna is willing to reduce the fixed fee in lieu of higher total fee after delivering results.